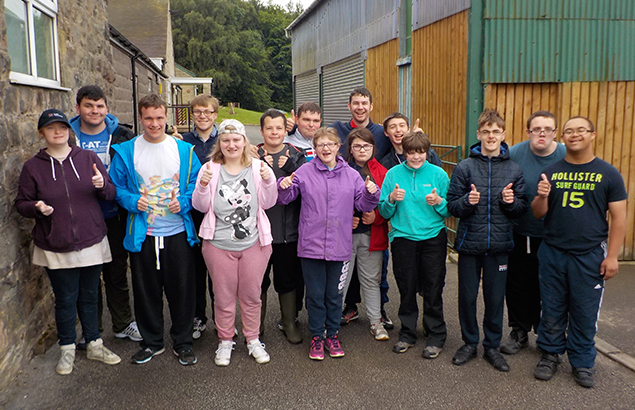 Thanks Again to ASDA!!

Donation of laptops by ASDA supermarket

We left Leek early, in the dark, with neatly packed suitcases, the 25 students full of excitement and travelled to Dover for the ferry to Calais. The excitement of seeing the port, this was clearly the first time some students had seen a ferry, was difficult to contain. Luckily, the journey across the channel was calm and we enjoyed standing on deck watching the white cliffs of Dover disappear in the sea haze.
We arrived in Ypres in the late afternoon and had plenty of time to explore the hotel before tea that evening. The first night of a residential is always an interesting time as some students are exhausted, some are too excited to sleep and the adults begin to realise the magnitude of what they have agreed to. Mrs Ball was the first member of staff to discover the secret door that led to the “fizzy refreshments”.

After breakfast the following day we headed to Bruges. We had a lovely walk toward the town centre, admiring the Flemish architecture before stopping to get our barge for a cruise along the canal. It was a nice way to see the town but perhaps the most fun was had waving to those looking down from the many bridges the barge went through. After continuing our stroll to the centre of Bruges the group split up. Some chose to visit the museum, whilst others, the bravest of the group, climbed the 366 steps to the top of tower overlooking Markt Place. There was even time for some retail therapy before returning to the coach.

On our journey back we decided to head into Ypres and have a look round. Having parked, we made our way to the Menin Gate where Mrs Ball told the group about the young men from Leek and Stoke whose names can be found on the memorial to those that gave their lives. Mrs Ball went on to show the skills that would make her a strong candidate for the Apprentice when she haggled with the proprietor of a chocolate shop to get the students some freebies and 10% off.

The following day we headed to Boulogne. We parked up in the centre of the town and walked straight into a busy market selling, fruits, vegetables, sweets, breads, meats, cheeses, clothes and gifts. After a nervous beginning, some coaching from Mr Pritchard, all the students began testing out their language skills with the stall holders. One stall holder stopped one of our groups and shared her delight and amazement in seeing this group of students in her own town but clearly far from home. She explained her sister had attended a special school in France and had been very much isolated from her community. Seeing these students, with such confidence, experiencing a community so far from their own made her very happy. So happy she allowed each student to choose a gift at no cost from her stall.

We then headed to the Naussica Sea Life centre and spent a fascinating afternoon exploring the tanks and pools containing a variety of weird and wonderful sea creatures. Be assured no one made any comments about the similarities in appearance between some of those creatures and senior members of staff who were back in Leek.

And so we woke up for our final day. We found the set of clothes that smelt the least bad and began to pack our cases. The boys exchanged the pants that were found on the floor, under duvets, under beds, hanging on curtain poles, until everyone had the correct undergarments. We then headed to Bellewaerde Theme Park. A cross between a theme park and a zoo, we had to make the most effective use of time. A plan was made to get us round the most exciting and thrilling rides in the few hours we had. Two hours later we left the park exhausted, wet and some students far quieter than we had ever known them. There is clearly a lot to be said for roller coasters that go backwards.

The journey back was as calm as it had been going. We arrived back in Leek in good time, full of stories to share with our families and friends and already discussing where we will head to in 2017…